You might have heard of RJ45 or RJ45 connector. And you probably used it a lot. For example, in the adapter card that is built in the computer. It plugs in, it clicks in. But what does that mean?

So, the International Standards Organization came up with a label for this type of connector.  RJ stands for “Registered Jack” and 45 refers to the interface standard number. It’s got a spot for eight pins, which means that it contains eight separate wires.

RJ45 is the most common type of the connector that is being used for Ethernet networking. It might resemble a telephone jack, however, it is a bit wider.

So, when you talk about an RJ45 connector, it’s just the type of physical connector we use to plug in, that’s all it is.

What are RJ45 connectors are used for?

These types of connectors are basically used to connect computers into Ethernet-based LAN (local area network).

The cable itself is unshielded. The cable that goes from the PC to the switch, the switch is basically the glue to allow all these devices to communicate with each other. The cable we’re going to use here is an unshielded twisted pair cable. 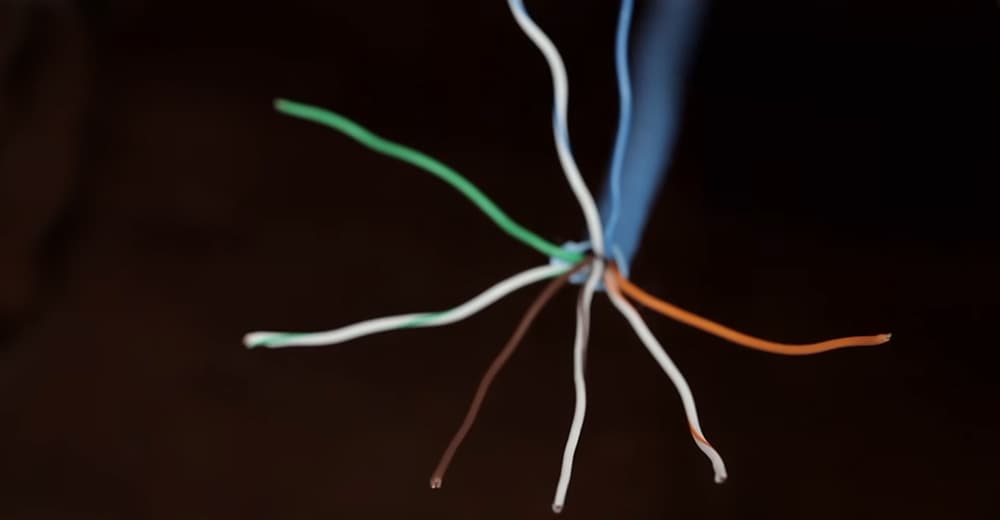 “Unshielded”, what does that mean? I’m going to give you an example for you to get it.

If you go out in the rain and you didn’t bring an umbrella, you could be considered to be “unshielded”. Unshielded from what? Rain. The rain comes in and you’re going to get it.

So, an unshielded twisted pair doesn’t have a little extra coat of metal around it to protect it from the rain.

Below is an example of unshielded twisted pair. Inside this cable, which is pretty fascinating, there are 8 wires. And 8 wires get put into 4 pairs. And those pairs of wires are all twisted individually. They’re twisted a specific number of twists per foot. It’s not random, all based on stuff that some engineer decided crosstalk – a whole bunch of characteristics that need to be just lined up perfectly to make it work.

Many years ago, back in 80s, there were Token Rings, and these Token Ring used shielded twisted pair. And so if you are running 1,000 cables across from your main data center, it takes a lot more space. Moreover, it’s harder to work with, because it doesn’t bend as much, and it’s more expensive.

That’s why today we use unshielded twisted pair.

There are different grades. Not every cable is created equally.

There is unshielded twisted pair, and then you have categories of cables. It’s not nice to categorize people (you’re this or you’re that, for example), but we do it for cable. Let me give you a good example.

Try to answer the following questions:

Down the very center you can see a piece of plastic. It is used to keep each pair separate from the other. So you kind of don’t mingle inside the plastic casing on the outside.

This is a category 6 cable. As we come out with higher speeds and higher throughputs, we have hire cable requirements for that technology. But just be aware that if you take 8 wires yourself and randomly put them into a clip and try to get a high speed networking out of it, it’s not going to fly if your cable is very long.

So, let’s make a conclusion about the RJ 45 connector:

Term “Registered jack-45” or RJ45 refers to a cable termination specification, specifying physical male and female connectors and the pin assignments of wires-in telephone cables and other networks that using these types of connections. Sometimes RJ45 connections are also being called as data jacks.