This post is about Raspberry Pi robots kits, but before going to the description of my top kits, let me explain some basic terms. Please, don’t get me wrong… I just want to make life easier for those who are not that familiar with robotics terms and Raspberry terminology in particular.

What is Raspberry Pi?

Raspberry Pi is a small, credit-card sized, single-board computer that is plugged into a computer monitor or TV. It uses a standard mouth and a keyboard. Using Raspberry Pi you can learn how to program some of the computer languages, Scratch and Python, for instance.

I’m not going to copy Buyers Guide (what to consider when buying any robot kit) here, as very detailed guides are in my other reviews of robotic kits. You can read it here.

My Top of Best Raspberry Pi Robots Kits for beginners in February, 2023 Review

END_OF_DOCUMENT_TOKEN_TO_BE_REPLACED 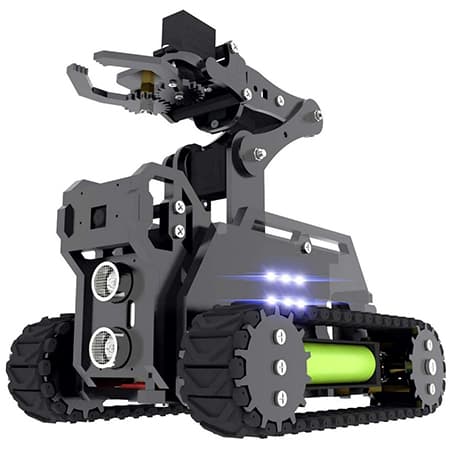 This STEM educational crawler mobile tank is a perfect kit for beginners. Anyone who is trying to get started playing with robotics would be able to learn A1, electronics and programming. The robot is based on Raspberry Pi and comes with Raspberry Pi camera, ultrasonic module, motor HAT, 18650 battery holder set, track and N20 geared motor. It can not only track a line, recognize an object and detect a motion, but move flexibly and grab lightweight objects with its 4-DOF robotic arm too.

Note: To assemble the robot, you need to follow step-by-step instruction on the adept website. Once assembled, it looks rather cool and compact. I don’t think you would have problems programming the tank. The procedure is straightforward: you need to run the setup script and it will automatically take care of installing most dependencies.

Tip: If you have never ever built any robot, watch the video in slow motion and step-by-step assemble the unit.

If you wish you can remotely control the robot either using the buttons of the keyboard or virtual buttons on the GUI. Moreover, you can have a real-time video transmission. It means that the real-time images taken by Raspberry Pi camera could be transferred to the any remote computer. This smart robot is also capable of tracking objects of a specific color and shape and walk along the line you draw.

If you are a fan of various light effects, you do it with RGB LEDs. There’s a possibility to change the variety of colors of the robot and indicate its working status.

END_OF_DOCUMENT_TOKEN_TO_BE_REPLACED 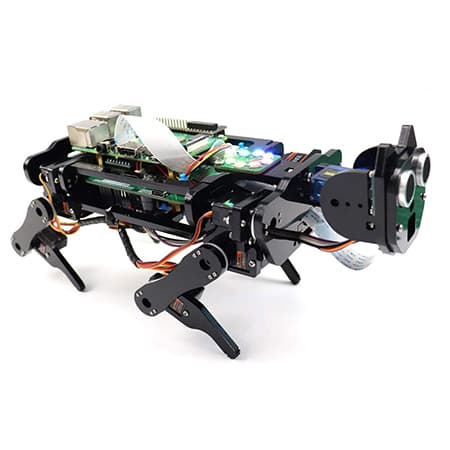 This multifunctional robot dog is such a fun to build! You would be amazed how many things it can do once fully assembled. It’s capable of self-balancing, tracing red ball, measuring the distance. It can also recognize of a face and be used as a buzzer. You can charge it on board and control wirelessly by any Android device, iPhone and computer. This educational kit is not very difficult to build as it comes with lots of out-of-box components: camera, LEDs, ultrasonic, gyro, 13 metal geared servos, and more.

Note: The kit doesn’t come with a manual. You can find it together with an operating software online, on the site of the manufacturer.

Tip: I would highly recommend this kit for those who are making their first steps in robotics. Of course, it would be better if you learn some basics of Raspberry Pi and Python. However, to activate this robot dog you don’t need to learn Python programming as a code is provided (it is an easiest way to get into complicated world of coding). And it could be a perfect gift too, just saying.

END_OF_DOCUMENT_TOKEN_TO_BE_REPLACED 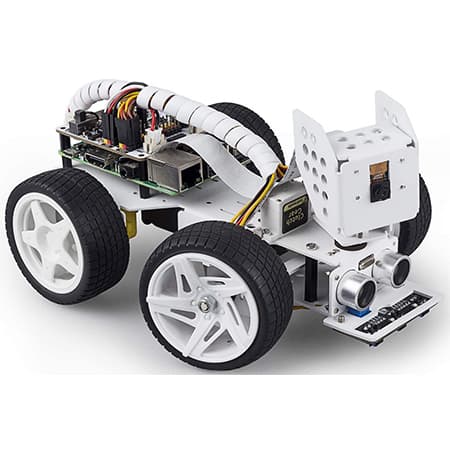 This multifunctional electronic DIY robot is a perfect way to learn robotics and build your own remote-control truck. The kit comes with various modules (camera, ultrasonic, line-tracking) which make possible face and color detection, automatic line tracking, real-time image/video transmission, text to speech conversion, automatic obstacle avoidance. It has collection of sound effects and background music. Moreover, you can program texted message “Hello”, for instance, and surprise your friends: any time your car sees a face, a programmable texted message would be played. Sounds great, right?

It also supports visual programming Web Control for Raspberry Pi 4B 3B+ 3B 2B and Ezblock/Python Code Control. The kit is perfect for beginners to learn codes.

1) What platforms can GUI app run?

As a rule, GUI app can run on Windows and Lunex platforms.

Generally, these DIY kits don’t come with Raspberry Pi boards, you need to purchase them separately.

3) How many generations of Raspberry Pi have been released by now?

It’s one of the versions of the operating system. Raspberry Pi runs this system.

In truth, most of the Raspberry Pi robot kits are similar. All of them will give you a chance to build a robot and program it. Before making a purchase carefully read the description and try to pick up the features you like the most.

All of the robots are really fun to assemble, program and play after! It can be an absolutely perfect gift for a beginner making his first steps in the multifaceted world of robotics.

I hope this review would help you to make the right choice about best Raspberry Pi robots kits for beginners. And don’t forget to read Buyers’ Guide!